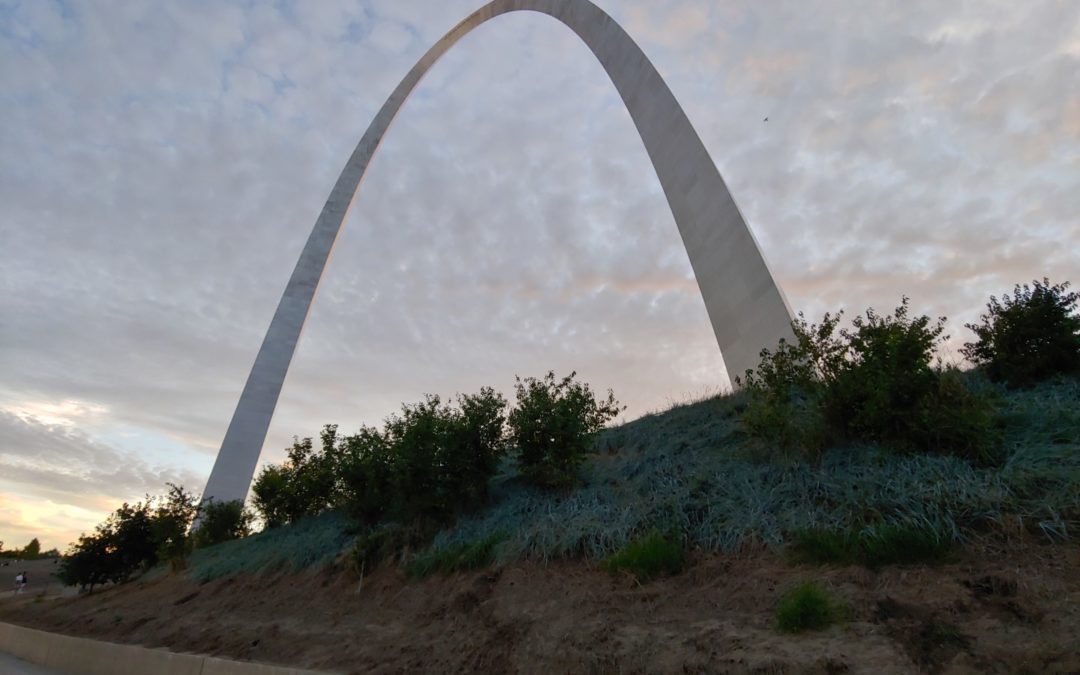 Not all RV parks are created equally. The first few KOA parks we stayed in were park like with trees and greenery. As we travel into large cities, the options are fewer. Last night we stayed at Worlds of Fun RV Park, which is just outside an amusement park. It was very civilized with a lot of pavement, concrete, small lawns and young trees. Unfortunately, it was close to a freeway and a major road used by semi-trucks, so it was a bit loud.

Today, we drove across Missouri from Kansas City to Saint Louis. I’ve never been to Missouri, and I was surprised by the greenery. Jungle-like trees and vines looked like they would easily reclaim the farmland given the chance. As we drove into Saint Louis, the landscape changed to bleak and industrial. Numerous abandoned buildings sprawled alongside the highway in heaps of crumbling brick.

We crossed the Missouri River for about the millionth (or maybe fifth) time to get to the Casino Queen RV Park. It advertised a view of the arch, and this was not a lie. From our patch of gravel in the parking lot, we can bask in the glory of the arch as a train rumbles by every 5 minutes. I now wish for the low hum of the freeway from last night.

Our main motivation for stopping in St. Louis was BBQ. St. Louis style ribs in particular. We chose Salt + Smoke as our purveyor of smoky meat goodness. This required driving back over the river and through block after block of dilapidated brick homes. The ivy jungle was winning the battle on many of the abandoned houses. Then suddenly we arrived at the Delmar Loop: a revitalized street with shops and restaurants.

We ordered fried ravioli as a starter. It was stuffed with brisket burnt ends and served with grated garlic and a nice aioli. I’ve been told that fried ravioli are a St. Louis thing. For dinner, we shared a plate of ribs, pulled pork and brisket. It also included a bacon popover, white cheddar mac & cheese, and beef fat fries. There were four different BBQ sauces on the table to accompany the meats. The St. Louis ribs are covered with a thick dry rub. Although it was all very tasty, Shawn and I agreed the Kansas City BBQ was slightly better.

After dinner, we drove back downtown to get a close up view of the arch. It is an architectural marvel.

Then it was back over the river to Illinois and our bleak RV park. We will be pulling up stakes early in the morning and heading for Louisville, Kentucky for a bit of tasting on the Bourbon Trail. We are staying at Charlestown State Park in Charlestown, Indiana and it promises to be more scenic than the Casino Queen. Off to find my ear plugs now…good night.

We use cookies to ensure that we give you the best experience on our website. If you continue to use this site we will assume that you are happy with it.OkPrivacy policy