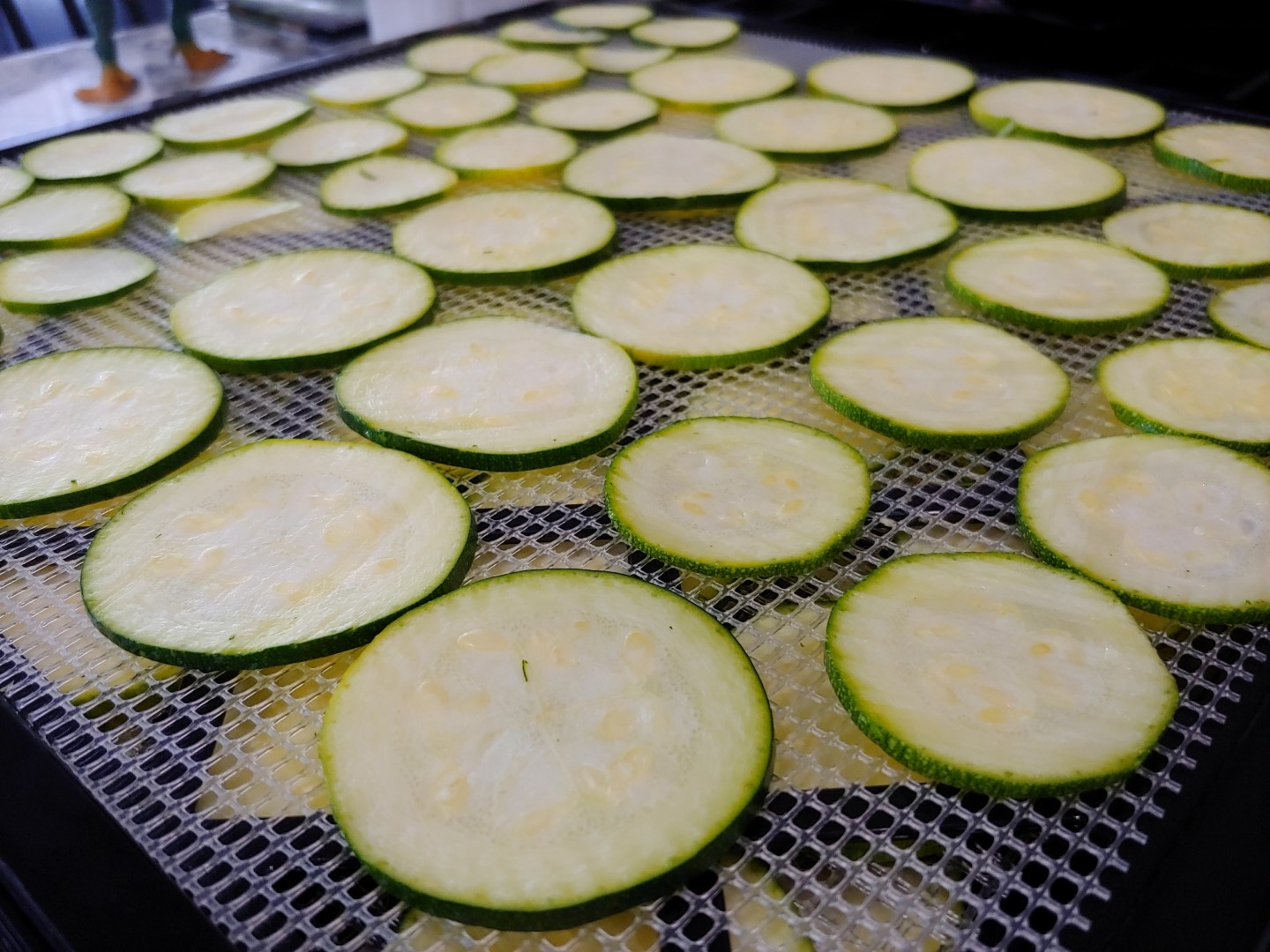 Last year, we only got a few zucchini from our garden. It was our first year, but any self-respecting gardener should be able to grow a decent zucchini. We were beginning to doubt ourselves. How would we survive a zombie apocalypse if we couldn’t grow a simple zucchini?

So this year we made the garden bigger. We started the seeds earlier. We watered and weeded more diligently. The efforts paid off (we will ignore the fact that the neighbors said they didn’t get many zucchini last year either).

For the last week, we’ve been harvesting about a dozen zucchini a day. What do two people need with this much zucchini you ask? I don’t have a clue, but I’m up for the challenge.

I started with the obvious: zucchini bread. That used about two zucchini. The food processor was setup, so I continued shredding and bagged up 2-cup servings to be frozen and thawed come winter when nary a green vegetable will be in sight. A dozen more zucchini dispatched.

Next, I tried the slicing blade on the food processor. Perfect for making dehydrated zucchini chips. I filled 9 racks in the dehydrator, but still the zucchini kept coming. I added a couple of handfuls of shredded zucchini to the spaghetti sauce that night. Next morning, I added slices to an omelette. I made zucchini fritters (yum). We handed them out to anyone who darkened our door (and we wonder why the UPS guy no longer rings the bell).

A few stealth zucchini were lurking in the garden growing to mammoth proportions. When those were found, we cut them into chunks and left them in the birdbath for the deer. Late in the afternoon or in the dark of the night, the white-tail deer wander into the yard to drink from the birdbath. Now, they get their fresh veg too.

Still the zucchini keep coming, so today I made zucchini powder. The dehydrated zucchini slices go into the Ninja blender and come out dust. I’ve been told we can use this to thicken soups in the winter.

So I will continue to soldier on and find ways to use zucchini, whether fresh or preserved. Every meal will have a serving or two of zucchini until the season ends.

The garden is beginning to produce a few delicacies aside from zucchini. We harvested garlic scapes and threw them into the food processor with olive oil, basil, Parmesan cheese, and nuts to make pesto. We have a bounty of chilies and peppers: jalapeno, serrano, poblano, pasilla, Thai, bell and more.

The next challenge will be tomatoes. There are hundreds of green tomatoes out there just waiting to be snacked on, canned, dehydrated, powdered and made into dishes of tomatoey goodness as soon as they ripen.

Along with the deer (a mama and a pair of young bucks), birds, bugs and other animals are finding sanctuary in our yard. The front yard is hopping with grasshoppers. The wild turkeys have taken to partying with our domestic turkeys. The magpies decimated our cherry trees this year before we had a chance to pick the Bings and Raniers. We saved a few sour cherries by picking them prematurely.

Near the house we have feeders out to attract a variety of birds: finch, robins, northern flickers and hummingbirds. There are at least eight hummingbirds that frequent our two feeders. I’ve been going through about a quart of nectar a day trying to keep up with them, and now they will let me get within 5 feet of them to take pictures.

And finally, a public service announcement. If you get bitten by a cat, get to the doctor for antibiotics ASAP. Our aging cat, Sophie, has stopped grooming herself so I was brushing her, which she loves…until she doesn’t. She chomped down on my hand to let me know the beauty session was over. Next day, my hand turned red and swelled up. It turns out that cats have some nasty germs and 85% of bites get infected. A tetanus shot and antibiotics are doing their best to return my hand to normal looking.

Don’t mess with me zombies, or I’ll sic my germy cat on you after beating you silly with a giant zucchini!

Feel free to post your favorite zucchini recipe in the comments!